SEASON OF THE WENCH (PART THE SECOND!) 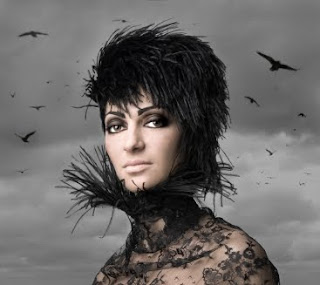 The Wench left me alone for several years after the blackbird incident.  She was always extremely fond of birds, as you see from her picture, so I wasn't quite clear about why she was so miffed.  It seemed she couldn't stay away, though.  She put in another appearance about the time I hit high school, though she was a little changed.  The crow was gone and so was the crescent moon on the forehead.  Her fingernails were bright red and sometimes dripped.  I thought she seemed a little smoky somehow, faintly singed around the edges, sort of like an overbaked cookie.  But she was being sweet and had brought a book of poetry, so I chalked it up to imagination.

Poetry it was then...then and for many years afterwards.  My mother had unintentionally abetted my muse's efforts by reading me such classics as Longfellow's "The Skeleton in Armor," about a ghostly knight in chain mail.  Having fallen on his sword for love of Lady Fair (I think she jilted him), the poor guy was doomed to spend eternity clanking around in his chain mail, trying to find her.  If Mom thought his spectre would frighten me, she was sadly mistaken.  I just developed a thing for guys in chain mail.  I'm still afflicted..

The Wench (I stopped calling her Morrigan when the crow left) helped me write sonnets, couplets, quatrains.  I was a talented classical poet, which of course wouldn't help much when that free verse thing took over, but for a time I did really well.  She was proud of my 100% publication rate and of course claimed all the credit.  But we were getting along, so I didn't dispute it or point out that I was the one up at 3 a.m. in pain with a poem while The Wench smoked a joint and got the munchies.  Or was that me?  I forget.  Well, if it was I never inhaled, anyway.

Then I began to notice...oh, dear...nothing was supposed to rhyme any more.  Other people were writing free verse. I was still hearing echoes of Edna St. Vincent Millay and Dorothy Parker, with quite a bit of Yeats thrown in since I was, after all, half Irish.  I was passe.  When I complained, my muse shrieked, scored up my bright, shiny pages of poetry with her drippy fingernails, thumbed her nose at me and vanished.

This time I felt her absence.  I was bereft.  So I got married.  Well, there were other reasons too, of course.  But the fact was that without The Wench hanging over my shoulder and shoving a pen in my hand, I finally had time to notice men and I married one of them.

That was all it took.  She came roaring back, proprietary as hell, and it suddenly occurred to me maybe Hell was where she had been.  That stuff dripping from her nails appeared to be...lava.  Her eyes weren't just smoky this time, they were burning coals.  She positively reeked of sulphur and there were holes burned in the bottom of her knee-high patent leather boots.  I had the temerity to question her (you could tell I was gaining confidence with a husband in the picture) and she peered haughtily down her aristocratic nose, informing me that she had been spending time with another goddess.  Specifically, Pele.  You know, the one for whom they used to throw virgins down volcanoes.  In Hawaii.  But I was in Pennsylvania, where there aren't any volcanoes, and marriage had taken care of that virginity thing, so I wasn't afraid for myself.  I just told The Wench, formerly Morrigan, that I thought she should be careful.  I didn't want her incinerated.  But she was  pretty much bowled over by Pele and didn't listen.