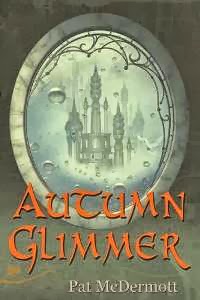 Pat McDermott here, back this time with Autumn Glimmer, a paranormal adventure for young adults of all ages, and I'm happy to announce that the book is now available in print. Set in an Ireland that might have been, Autumn Glimmer is the sequel to Glancing Through the Glimmer. The "Glimmer" books feature Ireland's mischievous fairies, who refer to their magic as glimmer. The stories are prequels to the Band of Roses Trilogy, whose "what if" premise supposes that High King Brian Boru survived the Battle of Clontarf in 1014 A.D. and established a royal dynasty still in existence.

Teenage Prince Liam stars in the Glimmer books, along with his American friend, Janet Gleason, who can’t seem to stay away from the fairies.

Because Janet’s grandfather is the U.S. Ambassador to Ireland, Janet lives in Dublin and attends an upscale boarding school. She still misses Boston, especially in autumn, when New England’s trees are so gorgeously vibrant. But she’s settled into her new life well and landed the lead in the next school play. When King Brian invites the Gleasons to his country estate to celebrate Halloween, Janet is happy: she’ll be with Liam again.

She should know Ireland better by now…

Blurb for Autumn Glimmer:
Janet and Liam meet again for a Halloween weekend they’ll never forget… Fairies living beneath the lake on the King of Ireland’s country estate? Janet Gleason isn’t surprised. The American teen and her royal friend, Prince Liam Boru, have met the Good People before. Just before Halloween, three of the fairies, Blinn, Mell, and Lewy, leave their watery home to fill a magical bag with the flowers their queen requires to keep a hungry monster asleep. A tragic ride on a Fairy Wind leaves poor Lewy lost and alone. Can Liam and Janet help him find the flower bag before the monster awakens? Or will Lewy’s misguided glimmer trap the young mortals forever in the palace beneath the lake?

Excerpt:
Below the bubble, the water brightened to lustrous cobalt blue. Stars seemed to shimmer deep in the lake. A forest of vegetation waved on the lake bed. The impossible sight of crystal towers emerged beyond the greenery, and Liam wanted to dance.

Janet raised a hand to her face. “It’s lovely, but why does it smell so bad?”

“What is it?” he asked, dreading the answer.

“The Crogall Cú,” said Becula, her nonchalant tone at odds with the stiffened sags and bags on her face. “When it hunts, its nostrils blow foul vapors to confuse its prey. Fear not, young prince. It shall not harm us.”

A terrible roar tore through the bubble. Janet yipped and clung to Liam. Squashing his lips to keep from yipping himself, he hugged her to him. The mist billowed into to a putrid fog that poured like custard to sully the water. Another roar, much closer this time, jolted the bubble.

Janet screamed. Liam’s heart leapt into his throat. A blood-red eye as big as an autumn moon stared in at them from the water. How could such a behemoth exist in the little pond? Liam tightened his hold on Janet and hoped the Invincible Orb lived up to its name. 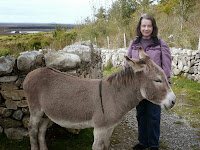 Salty Roses Rounds Off the Band of Roses Trilogy 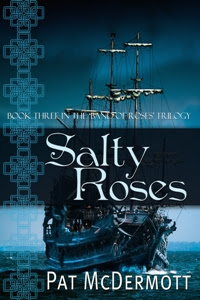 Pat McDermott here, announcing that Salty Roses, Book Three in the Band of Roses Trilogy, has just been released in print. That means the entire trilogy is available in paperback!

The Band of Roses Trilogy, a series of romantic action/adventures set in a modern Ireland that might have been, supposes that High King Brian Boru survived the Battle of Clontarf in 1014 A.D. and established a royal dynasty that rules Ireland to this day. As head of state, the current King Brian upholds ancient traditions, as does his daughter, Crown Princess Talty, though Talty has a knack for landing in trouble.

Book One, A Band of Roses - The indomitable princess must hide her identity to outwit assassins, but she can't hide her ingrained training as a warrior sworn to protect her homeland. From Japan to California to an eleventh century Ireland, she finds romance and adventure, yet all she wants is to return to her family and Neil Boru, the adoptive cousin she secretly loves and cannot have—or so she thinks.

In Book Two, Fiery Roses, a major discovery of offshore gas ensnares the Boru clan in a web of blackmail and murder. When the residents of rural County Mayo object to plans to run pipelines over their pristine bogs, an arsonist tries to change their minds. One of his fires sends newlyweds Talty and Neil to an ancient world at the mercy of a waking volcano. While they struggle to outwit a tyrant with a shocking secret, King Brian locks horns with ruthless oilmen. The resulting conflict proves fatal for the Boru clan, whose members once again close ranks to thwart the latest threat to the kingdom they are sworn to protect.

Book Three, Salty Roses, finds the dynamic heir to the Irish throne thinking her days of exotic adventure are all done and dusted, yet Talty's royal duties seem endless, and a day off with handsome husband Neil is looking good. Former naval officer Talty eagerly accepts an eccentric billionaire’s invitation to sail aboard his luxury submarine, but as she and Neil dive beneath the waves to view an eerie shipwreck, a sinister plot unfolds. An unknown enemy lures them to an ancient tomb and sends them to a world infested with treacherous pirates. Talty takes charge of a pirate ship and its mangy crew, while Neil matches wits with a steamy temptress who jeopardizes his wedding vows. As he and Talty fight to save their marriage, they learn that the door to parallel worlds swings both ways.

An Excerpt from Salty Roses:
The wind fills the rigging and whips my hair. Salt spray dampens my face. The men at the oars propel my galley over the sea to capture the foolish merchant ship that dared to invade my waters. She sits low in the waves, weighed down with gold and silver, packed with silk and spices from the Far East. She’s mine.

"Man the cannons!” I shout from the gun deck. “Prepare to board her!”


“Your Highness? We have here a model of Granuaile’s galley. Not an exact reproduction, but assembled as closely as possible from the descriptions in the existing records.”


The droning words seeped into Talty’s fantasy like ink drops clouding a pool of water. The bracing tang of briny air gave way to the scent of new wood and fresh paint. She was back in the Grace O’Malley museum in Louisburg, Mayo.


“You’ll walk the plank for this, me bucko!”


Though miffed that the curator’s ongoing narrative had spoiled her imagined adventure, she smiled graciously at the gangly, white-haired man. “The ship looks quite authentic, Mr. Gavin.”


The raisin-like eyes behind his glasses squinted back at her. “Grania had several galleys under her command.” Gavin walked on, babbling away about tribal warfare in sixteenth century Ireland.


Talty knew the story of Granuaile, also known as Pirate Queen Grania “Grace” O’Malley, yet she listened politely, ambling along after Gavin to the next display. Neil stopped beside her, biting his lip the way he did when trying not to laugh. The merry gleam in his eye said he’d caught her daydreaming.


She stepped on his foot. “I understand Grania divorced one of her husbands and locked him out of his castle.”


Talty stepped harder on his foot, somehow managing to keep her public smile in place. “Isn’t the name from the armor he wore?”


Gavin’s unsmiling face betrayed no awareness of their playful interaction. His attention seemed riveted on the exhibit before him. He clasped his hands behind his back. “That’s one theory. The name may have referred to an ironworks on his property. Unfortunately, we have more folklore than fact about the history of this time. It’s folklore that tells us how Grania herself became known as Granuaile. ‘Gráinne Mhaol’ means ‘Bald Grace’ in Irish. Legend has it she cut her hair after her father refused to take her along on his voyages. He claimed her hair was so long, it would get caught in the rigging.”


Neil tugged Talty’s shoulder length hair. “Obviously he let her sail with him after that.”


“Obviously. This ends the tour, ma’am. If you’re ready, we’ll officially open the museum.” Gavin started for the door.


Talty followed, recalling one of her favorite stories about Grace O’Malley. Only hours after the Pirate Queen gave birth to a son in her cabin, foreign pirates attacked her galley. Grace appeared on deck clad only in a blanket. She shot the pirate captain with her blunderbuss pistol and led her men to victory. Having recently experienced childbirth herself, Talty found her admiration of the legendary woman turning to awe.


The wax figures of Granuaile and her husbands, sons, and enemies positioned throughout the room appeared ready to step down and strike up a conversation. Colorful murals on the walls portrayed seascapes and sixteenth century sailing vessels, adding to the fanciful mood.


This morning’s formalities would be modest compared to the afternoon gala at the Marine Foundation, yet Talty suspected she would spend the most enjoyable part of her day here in Mayo. The Marine Foundation was important, yes, but the reception following its opening ceremony was “by invitation only.” She dreaded facing the fawning, praise-seeking politicians who’d have the run of the place, and she didn’t care a whit if she ever met the billionaire tycoon, Roxy what’s-his-name.


The Granuaile event was open to the public. Talty looked forward to her allotted forty-five minutes of shaking hands and chatting with the people before the Morrigan whisked her south to Galway. Silently rehearsing her short speech, she walked between Neil and Gavin to the Granuaile Center’s humble lobby. The standing crowd enthusiastically applauded her entry.


Despite the warm welcome, Barry and Rory stood guard on either side of the packed little room. Their eagle-eyed vigilance was more than adequate for this quiet corner of Mayo. Security at the Marine Foundation would be tighter than a goatskin on a drum.

Her public smile firmly in place, Talty cordially greeted the well-wishers, who had no way of knowing she was already back on her pirate ship, shouting orders to man the cannons and prepare to board. 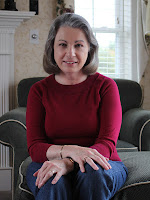 Boston native Pat McDermott writes romantic action/adventure stories set in Ireland. Glancing Through the Glimmer and its sequel, Autumn Glimmer, are young adult paranormal adventures starring Ireland’s mischievous fairies and an Irish royal family that might have been. Both books are “prequels” to her popular Band of Roses Trilogy: A Band of Roses, Fiery Roses, and Salty Roses. Her first contemporary romance, The Rosewood Whistle, features Ireland’s music and myths.