Pat McDermott here, happily letting everyone know I have a new release: a contemporary "autumn" romance set in western Ireland and Dublin.

The Rosewood Whistle is something different for me. No fairies, no parallel worlds, just a tribute of sorts to Ireland's traditional music, spellbinding legends, and unique humor told through the cautious but compelling relationship of a man and woman offered a second chance at love.

I had fun with this one. Each chapter title contains a phrase from an old Irish song. No worries if you can't guess them all while you're reading. I added a list of titles at the end of the book.

Here's the Blurb:
Surrounded by Ireland’s music and myths, a widowed American writer meets a tour guide leery of love…

On her own at the end of a long and difficult marriage, Gemma Pentrandolfo still hears the critical voice of her husband taunting her from his grave. To foster her independence, she schedules a summer vacation in County Mayo intending to write her first book, and she's counting on Ireland for inspiration. An idea presents itself when she explores Achill Island with a silver-tongued tour guide whose good looks prompt her to write more than her high-minded novel: she transcribes her years of longing in a steamy fantasy no one is meant to see.

Years have passed since an accident claimed the self-absorbed wife who scorned Ben Connigan and his music. Since then, the former tin whistle ace has avoided marriage, though he never lacked for female companionship before he traded his high-tech career for the slow-paced life of a hometown tour guide. Ben has accepted the end of his run of discreet affairs, until he takes Gemma touring. Her passion for Ireland impresses him. Her love of Irish music soon compels him to dust off his whistles. Knowing she'll leave at the end of the summer, he sees no harm in keeping her company—until he dares to dream of spending the rest of his life with her.

But he knows it can't be, not while the ghosts of their partners still haunt them. Not unless the music and myths of Ireland can help them find their way…

And an Excerpt:
Scully tapped his arm. “Go buy her a drink, Ben.”

“You’re staring at her like she’s one of them feckin’ U F of Os.”

“She’s windin’ your clock, Big Ben,” said Tom. “Be said and led by me: paddle the wave when it comes along. Buy the woman a bloody drink.”

A vigorous nod bespoke Scully’s agreement. “At least give her your business card. She’s a Yank. Probably wants to see the sights. Trace her roots and all that shite.”

Ben raised a hand. “Back off. I need no advice from a pair of henpecked husbands wearing their wedding rings through their noses.”

Undaunted, Scully and Tom tilted their drinks to their smirking mouths. The gleam in their eyes dared Ben to act. Despite their jowls and glasses, they might have been fifteen again.

He wasn’t about to reveal the incident with the hose to these two. They didn’t have to know he only meant to apologize, not initiate farcical courtship rituals.

So why did a pendulum swing in his chest, its speed increasing with every stroke?

Something to do with her drenched blouse and pants. Would she remember him? Accuse him and his garden hose of lewd behavior? He swallowed a mouthful of beer and wiped his hand across his lips. The pendulum slowed. Aware of the eyes digging into his back, he kicked himself out of his chair and swaggered to her table.

She read her menu through little gold glasses. Tiny laugh lines enhanced her eyes and her curving lips. No lipstick. Ben liked that. She held the one-page card in her long slender fingers. No nail polish.

No paint nor powder, no none at all…

And no wedding ring. Scully was right about that at least.

She frowned at the menu as if she couldn’t decide what to order. He thought he might suggest the soup, or perhaps the fish and chips, or maybe…

He’d reached the chair where she’d laid her coat. She sensed him there, for she looked up. Eyes as brown as Belgian chocolate widened in surprise. Her mouth fell open; her cheeks turned crimson. No doubt about it, she knew him. Now what?

Fortune favors the bold, and all. Exploiting her befuddlement, he pounced. “We haven’t been properly introduced. I’m Ben Connigan. Might I sit?"

Her eyes returned to their normal size; the red in her cheeks softened to a tea rose hue. She slipped off her glasses and smiled at him, and his heart flopped like a fresh-caught trout.

Available in Print from
Amazon
Posted by Pat McDermott at 5:02 AM 4 comments:

MY RELUCTANT HIGHLANDER is out! 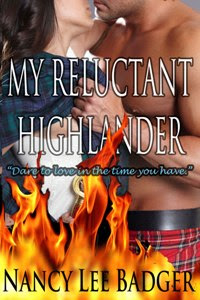 It has been a long time coming, but I am proud to announce the release of my third book in the Highland Games Through Time series.


MY RELUCTANT HIGHLANDER returns five years later to the fictional New England Highland Games and follows Skye Gunn, sister to the Gunn laird, and Jake Jamison, a present day blacksmith. Though this is the final book in the series, I plan to write several novellas using secondary characters, like a TV show spin-off. This is also my first attempt to use my Art Degree to make my own book cover. I hope you like it. The book is a full-length novel, which will be available in print in the near future.

Book Blurb
Skye has spent the last five years trying to forget the blacksmith who followed her back to 16th century Scotland, to help fight evil. Sending Jake Jamison home against his will was a disastrous mistake. She risked everything attempting to defeat Andreas Borthwick. Jake might have defeated the evil sorcerer, preventing her husband’s death. When she prevents the sorcerer from grabbing her nephew, he takes her instead. To escape, she defies time to find Jake.

The last person Jake wants to see is the young woman from ancient Scotland; the same woman who has haunted his dreams since she blackmailed him into traveling back in time. Before he could save Skye Gunn’s people, she had sent him home. Until he met Skye, his life had been normal. Quiet, and uncomplicated. No one knows he is a firebreather, except her. His ancestry is a mystery. When Skye falls into his bed—beaten, bloody and beautiful—Jake must choose to trust her, or turn his back on the only woman he’s loved across time.

Skye encourages Jake to use his ability to help her kill the sorcerer. Stealing his heart was not part of the plan. Jake must share his secret, Skye must give her heart fully, and both must dare to love in the time they have.

AMAZON     KOBO   SMASHWORDS
NOOK     AllRomancEBooks
ITunes (coming soon)
Don't forget to check the other books in the series:
My Honorable Highlander & My Banished Highlander
Posted by Nancy Lee Badger at 9:53 AM 6 comments: 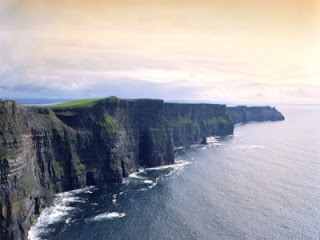 Here is link of possible interest courtesy of our friends at Irish Celtic Jewels: