I'm very excited to announce the release of my new holiday novella from the Highland Gardens series, Just in Time for a Highland Christmas...

Just in Time for a Highland Christmas
A Highland Gardens Novella
Book #2.5

Can a determined brownie craft a perfect match in time for Christmas?
When the Chief of Clan MacLachlan travels to the stronghold of his feuding neighbors to fetch his betrothed, she is gone. A year later, she is still missing. Making life more vexing, a band of reivers are stealing clan cattle, leaving behind destruction. Archibald MacLachlan determines to capture them and administer harsh punishment.

Though once in love with the man, Isobell Lamont refuses to wed her clan's enemy. After running away, she joins the band of reivers set on revenge.

Can Archibald forgive the raven-haired beauty? Will a journey through time bring them together for a Highland Christmas?

Just in Time for a Highland Christmas, a Scottish historical time travel romance, is 101 pages of Highlanders, scheming faeries, a mischievous brownie, magic, adventure, and romance set in 16th century Scotland and the Blue Ridge Mountains of North Carolina.

Fir-wood, Strathlachlan, Scotland, 1511
They weren’t alone on the land. Branches rustled and cracked, the sound amplified by moist Highland air. Archibald signaled the men to silence.
A lone rider broke from an adjacent clump of trees, glanced around, then galloped through the amber grass, leaning low against the stallion's black neck. The slight figure looked over a shoulder once before darting into the wood at the far edge of the meadow and disappearing through autumnal foliage.
Archibald released a loud hiss. The path the fool had taken at risk to both horse and rider was nothing more than a narrow game trail, a dangerous track to approach at such speed.
“Ach, that ragged lad rides well,” the redheaded Duncan exclaimed.
Archibald eased back in the saddle and threw his cousin a sideways glance. "He rides a fine piece of horseflesh, I grant you that. He is likely one of the Campbell's rash, young grandsons."
“Without guards, and on MacLachlan land? Nae Campbell would dress in such tatters.”
Duncan's aghast expression brought a smile along with a forgotten memory to Archibald. As green lads, he and his twin brother Patrick had dressed in servants’ castoff garments and snuck away from Castle Lachlan for a jaunt in the Fir-wood. They later received a memorable scalping when Da caught them roaming about without escort.
“Must be a Campbell lad unaware of the border to our land. I am sure he will feel his father's disfavor across his backside before this day is through. That is, if he avoids breaking his neck first.”
“Aye. For a fact, Chief.” Duncan laughed. A hearty sound that never failed to cheer Archibald.


Poor lad. Duncan braved his temper on this frustrating journey. He'd owe the man a boon upon their return to Castle Lachlan after they fetched Archibald’s bride.
“Let us be on our way, I want my lady ensconced within our keep before winter sets in.”
He reined his horse to the left toward the more traveled trail through the Fir-wood, eager to reach Toward Keep, the stronghold of the Lamonts. Duncan rode at his side as captain while the rest of the Lèine-chneas, his hand chosen guard, followed a short distance behind.
The image of laughing violet eyes urged Archibald to a faster pace. He couldn't wait to hold the raven-haired Isobell in his arms again, inhale her intoxicating scent, caress her ivory skin, and kiss her pouty lips.
* * *
The sun set on the horizon. Crimson colors faded to mauve, a beautiful end to the day after its wet and trying start. Isobell Lamont spurred her horse to greater speed. She would escape the dictates of her overbearing father, even if she might die in so doing.
Her aunt in Glasgow would surely hide her, if Isobell avoided capture. Before she reached the burgh, however, she must cross the land of her unwanted MacLachlan betrothed, the hated Campbells, and other clans she didn't ken. She reveled in the knowledge her journey might be fraught with peril.
She'd always dreamt of doing something truly adventurous.
The doing is never as grand as the dream. With a shake of the head, she ignored the nagging voice admonishing her and rode into the wind, the scent of fir in the air and an invigorating chill on her cheeks.
After risking discovery by crossing yet another open meadow, she eased the reins and sought the wood. Thank the good Lord the weather had cleared. She coaxed Dealanach Dubh into the shelter of a thick cluster of firs and slid from the stallion's massive back.
“Good lad,” she crooned as she patted his sweaty flank, a horsy odor prickling her nose.
Isobell's stomach rumbled. Should have raided the larder before running off in a rage. Dealanach Dubh could graze on the sparse grasses, but what could she eat? Would she never learn to think before reacting to Da in anger?
She'd needed to escape, though, before Archibald MacLachlan arrived to fetch her. She wouldn't marry her clan’s enemy even if she once thought herself in love with the man. It didn’t matter that his once-beloved silver eyes, cleft chin, and chestnut hair still haunted her dreams, or that the thought of his warrior’s body made her feel achy. She squeezed her eyes tight, refusing to shed a tear over a man who wasn’t what she once believed him to be. Grrrr. And Da intended to force her hand. He’d signed the betrothal agreement with the blessing of the king, giving her no choice but to run away. What had changed Da’s mind?
She jerked her eyes open and stared off into the wood. For the past year, he’d raged about the evils perpetrated by Archibald and his clan. She couldn’t wed such a despicable man even if Da changed his mind and thought the match a good one. The men's plans would come to naught. She leaned against a large tree and smiled. Soon she would be in Glasgow, away from their schemes.
Wrapped within the false security of the dense trees, men's voices startled her. Everything within stilled. What have I stumbled upon?
After tying Dealanach Dubh to a branch, she crept closer to the voices, taking care to stay well hidden in the trees. In a wee clearing, a group of ratty men sat around a fire deep in discussion. She worried her bottom lip. Had she inadvertently stumbled into grave danger?
A sudden change in wind direction blew acrid wood smoke into her face. She sniffled, wrinkled her nose, and when she suppressed a sneeze, sagged against a tree in relief.
Gloaming was upon them, and Isobell strained to better see the men. Reprobates all. She started to scoot away— Wait. She recognized a few of them. Lamont warriors who’d left the clan in disgrace and, if rumors were true, taken up with Da’s banished henchman Malcolm Maclay. The warriors must have joined this band of ruffians after Maclay died during a fight with one of Archibald’s men.


She leaned forward to better hear the conversation. Perhaps glean something of import.
Most of their words were spoken in muttered whispers. With a frown, she edged closer, but then had second thoughts. Now would be a good time to leave before they learned of her presence. Too late. One man rose and paced toward her hiding place. Isobell fingered the dirk in her belt, ready to flee, but when he strode back to his cohorts, she held position.
“If we raid the MacLachlan encampment on the northeast border, we can make an escape across the disputed land with at least five head,” the man spoke in a deep voice.
Humph. They were planning—
A large hand gripped her shoulder from behind and yanked her around. She froze, breath stuck in her throat, too shocked by the familiar face to pull free her blade.
"What have we here?"


Just in Time for a Highland Christmas available HERE.

~Dawn Marie
Posted by Dawn Marie Hamilron at 6:09 AM 1 comment: 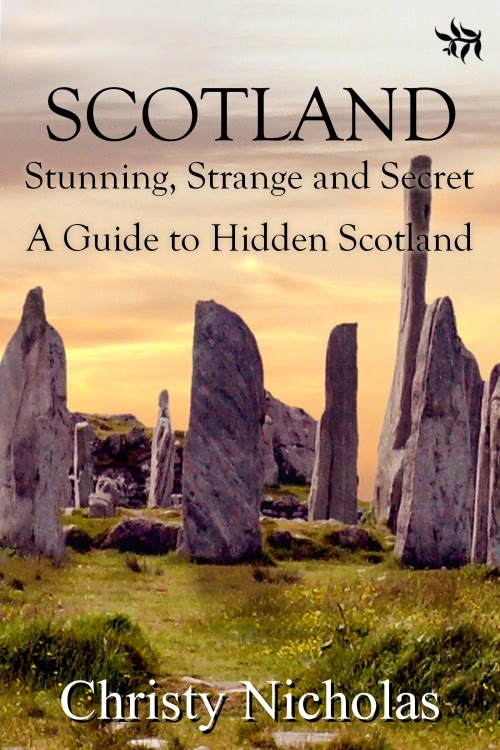 Get your copy here: Tirgearr Publishing

Do you find yourself drawn to the magic of Scotland? Would you like to see places beyond the typical tourist traps? Come, join me on a journey through the mists of legend, into the hidden places of mystery. Immerse yourself in the legends and myths, the history that has made this island precious in the hearts and minds of millions. Along with the tales and history, there is practical information on planning your trip, budgeting your costs, and finding the best places to while away the magical hours of your holiday.

Visit Heart of Fiction today. Leave a comment or question with your email address, and enter a chance to win a free copy of this book.