Fiery Roses, Book Two in the Band of Roses Trilogy - Now in Print! 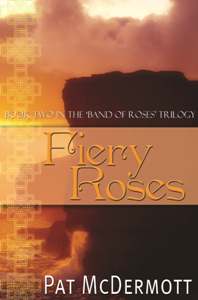 Pat McDermott here, visiting The Celtic Rose today with an excerpt from Fiery Roses. I'm happy to announce that a year after making its e-debut, the book is finally out in print. I enjoyed revisiting memories of north Mayo while I revised and updated the story, my classic "Middle Child," often overlooked but a gem in its own right.

The "Roses" books are romantic action/adventures set in a modern Ireland that might have been. The "what if" premise supposes that High King Brian Boru survived the Battle of Clontarf in 1014 AD and established a royal dynasty still in existence. As head of state, the current King Brian upholds ancient traditions, as does his daughter, Crown Princess Talty, though Talty has a knack for landing in trouble.

In the first book, A Band of Roses, Talty must hide her identity to outwit assassins, but she can't hide her ingrained training as a warrior sworn to protect her homeland. From Japan to California to an eleventh century Ireland, she finds romance and adventure, yet all she wants is to return to her family and Neil Boru, the adoptive cousin she secretly loves and cannot have—or so she thinks.

In Fiery Roses, a major discovery of offshore gas ensnares the Boru clan in a web of blackmail and murder. When the residents of rural County Mayo object to plans to run pipelines over their pristine bogs, an arsonist tries to change their minds. One of his fires sends Talty and Neil to an ancient world beset by a waking volcano, and the residents believe she is the Goddess Pele, come to save them. As they struggle to outwit a tyrant with a shocking secret and find their way back to Ireland, King Brian locks horns with ruthless oilmen trying to bully their way over the bogs.

Fiery Roses wasn’t supposed to be a sequel. When I started writing the book, I researched arsonists and developed a character sketch of an arsonist. Meanwhile, I monitored the Irish news online, vicariously living in Ireland, the country with which I’d fallen in love during my first visit in 2004. I noted rumblings concerning plans to harvest the natural gas discovered off the northwest coast of County Mayo in 1996.

My arsonist began to merge with the cast from A Band of Roses. With the indomitable Princess Talty and her spirited kin still fresh in my mind, I wondered how the Boru clan would deal with the situation in north Mayo.

My husband and I decided to visit the Mayo bogs. We passed through some scenic country, the Atlantic Ocean to our left, the Nephin Mountains to our right. The bogs might have been rolling meadows, but the blankets of green weren’t grass. They were scraw, the layer of tough fibrous sod that covered the peat, or turf, as it’s called in Ireland. Masses of white bog cotton and yellow buttercups painted the scraw. Cows and sheep roamed everywhere.

We soon saw men in hard hats working behind a chain link fence, large sections of blue pipe awaiting installation, and protesters sitting in parked cars. Surrounding them were hand-painted signs that said things like, "We are Irish citizens, not Shell subjects."

The next morning, we learned that Royal Dutch Shell had sought and obtained a court order for the arrest of five Mayo men who refused the company access to their land. The men spent ninety-four days in prison.

As I worked on Fiery Roses, a story filled with fictitious villains and heroes, I followed the Irish news, waiting for some resolution to the increasing hostility in north Mayo. I spent three years writing the book and tidying up all the imaginary plot twists. Sadly, the real situation in north Mayo remains unresolved.

* * * * *
EXCERPT from Fiery Roses - A Little Lost:
From his window seat in one of Casa Verro’s largest guest suites, Neil opened the shutters and caught the scent of the sea. Beneath him, a patchwork of planted fields and pastures stretched for mile after emerald mile. Yet the realization that the land sat on a waking volcano spoiled the idyllic scene. That and knowing the verdant panorama wasn’t Ireland.

The air currents shifted. Tantalizing whiffs of roasting pork and baking bread made his mouth water, yet they couldn’t subdue his growing dread that he’d never see Ireland again, never fly again, or zoom off in his Jaguar. His family, his friends, and his precious Talty would all be lost to him if the Peregrine Portal left him behind when it called the others home.

The fervent "Ooh!" behind him was a sound he knew well: Talty had found something to wear to the feast for the Meddiss. Neil turned his head just as Renen raised the top of a shimmering white gown over the pink-tipped breasts that perfectly fit the palms of his hands.

For over an hour, Talty had been trying on the late Danella’s gowns. Renen had come to help. Her shocked gasp when she’d first seen the scars on Talty’s chest had nearly caused Neil to send the woman away. Talty had said nothing, and Renen, a servant unaccustomed to questioning her betters, had recovered well.

"This is lovely, Renen," Talty said.

"It is the finest silk." The fussing servant pinned the shoulder straps with matching broaches.

The dress fell in graceful folds, the cloth so fine it seemed transparent. Gold threads woven through the material shimmered with Talty’s slightest move. The gathered waist flattered her slender form—too slender in her view, it seemed.

"It fits well enough," she said with a downward glance, "but the top is too big."

"Your mamms do look a little lost in there," Neil called from the window.

The women’s heads jerked. As he’d suspected, they’d forgotten he was there.

Talty raised her chin and glared. "You never seem to have any trouble finding them!"

Renen grinned at the playful repartee. "The baroness stretched the dress more, yes, but you, Lady, are well formed and lovely. We will show them. We only have to fix the pins." She gathered the material tighter and reset the broaches.

"You look more grippable now, darlin’." He made squeezing gestures and laughed at her openmouthed gasp. "Really, Tal, you look fine. No goddess could be more beautiful."

"This one can," said Renen. "We will add perfume and jewels, though even the baroness had no rings as fine as yours, Lady."

Talty extended her hand and gazed at the rings Neil had placed there. She smiled lovingly at him as she answered Renen. "I feel strange wearing Danella’s things, but I suppose I have no choice."

"No," Neil muttered. "The airline lost our luggage." 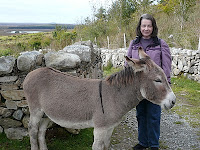 Boston, Massachusetts native Pat McDermott writes romantic action/adventure stories set in an Ireland that might have been. Glancing Through the Glimmer and its sequel, Autumn Glimmer, are young adult paranormal adventures featuring Ireland’s mischievous fairies. Both books are “prequels” to her popular Band of Roses Trilogy: A Band of Roses, Fiery Roses, and Salty Roses. Her first adult contemporary romance, The Rosewood Whistle, was released in June, 2013.
Pat is a member of the New Hampshire Writers’ Project, Romance Writers of America, and Celtic Hearts Romance Writers. Her favorite non-writing activities include cooking, hiking, reading, and traveling, especially to Ireland. She lives and writes in New Hampshire, USA.