THE HEART OF A CELT

With our modern holiday Halloween approaching, I thought this might be an appropriate time to remember that it found its origins in the ancient Celtic festival, Samhain.  But did you know this was only one of four fire festivals? 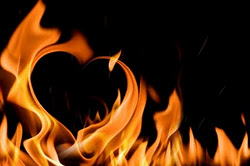 "The heart of a Celt is a heart of fire."

This quote from--ahem--one of my own books is as close a truth as I know, because the four Fire Festivals of the ancient Celts still live in our own time...and perhaps, for many of us, in our hearts.

The ancient Celtic calendar reckoned days from sunset to sunset. For this reason most--but not all--festival bonfires were lit as the sun set.

Samhain, our present-day Halloween, was the beginning of winter and also, coincidentally, a festival of the dead when the veil between this and the Otherworld was considered so thin that spirits and mortals could meet. At least in part to prevent dangerous straying, communities gathered around huge bonfires lit on the night of Samhain.

Imbolc, celebrated from February 1 - 2, was considered the beginning of spring. It was and still is the beginning of lambing season; my large animals veterinarian, Missy, spent one semester during vet school in Scotland, delivering lambs.

Beltane later became our modern May Day. Cernunnos, the horned god of Ireland, was held to have died and been reborn on Beltane, which was an unabashed fertility rite. In ancient days, it was also the time cattle were driven out to pasture until autumn. The bonfire lit for Beltane was a mark of joy at the return of the sun...and the return of Cernunnos.

Finally, Lughnasadh was the feast of the god Lugh and celebrated from July 31 - August 1. It was traditionally the time when spirits began to be distilled for the coming year. Even today in the British Isles, many distilleries close for the month of August and reopen on September 1. As you sip a good whiskey from those parts, give a tilt of the hat to Lugh--that is, if you can remember where your head is. After a morning of whiskey-tasting at Jameson's Distillery in Ireland, I couldn't!

The traditions still live in many of us. You have but to scratch the surface to find the ancient Celt beneath.
Posted by Miriam Newman at 2:17 PM 8 comments: