Poor Wench.  She was gone for a really long time.  Years, in fact.  Her memory got buried under slag heaps of laundry, lofty snow-covered mountains of cleaning, metric tons of cooking.  Then there were the interminable dinner parties, entertaining, road trips, sick children, sick parents...not to mention a couple of jobs.  My husband had caught onto the fact that I had a muse and made her thoroughly unwelcome in our house.  There would be no more three a.m. pains with a poem.  Nope.  Not in his house.

Wench caught on.  When I next saw her she was a forlorn creature peeking around corners: 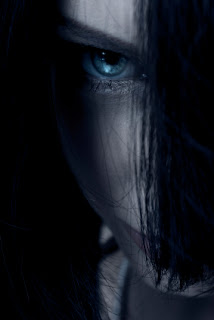 I had never seen her so reduced.  All she could give me was the occasional  poem whispered in the middle of the night, sort of like two little girls hiding under the covers at a slumber party, whispering so they don't wake up parents.  Poor Wench.  There was no room for her in my house, so she went to Hell.

She finally burst into the house in the middle of the night, in flames, full of fury and spitting righteous indignation.  I recoiled in shock, because this time she was running actual streams of lava.  She was a SOUL ON FIRE and informed me in no uncertain terms that she was not Morrigan, she was certainly not The Wench, she was Persephone the Queen of Hell and I would address her as such.  Apparently Pele's patronage had given her a real jump up in life...or death...or wherever she had been.  Anyway, the most I could hope for was a truce.  I could call her Seph and, like The Terminator, SHE'D BE BACK.  And with that she stormed out, leaving me with the most awful feeling in the pit of my stomach that someday she was going to take revenge on me for banning her from the house.  It was only a matter of time.
Posted by Miriam Newman at 2:19 AM