I scratched my head the first time someone told me Scotland was famous for its dragons. "You're kidding," I replied, then listened intently. I liked dragons, didn't I? I wanted a plot for a book that incorporated ancient Scottish life with the paranormal. Why not use dragons?

This kind of thinking led me to research. Dragons, legendary creatures, are typically pictured as having serpent-like or reptilian traits. Dragons are featured in the myths of cultures spanning the globe, not just medieval England. Since Scotland is where I base my newest novella, DRAGON’S CURSE, I'll talk about these mysterious creatures that settled there

Rumor has it that dragons are a mix of the serpent, the feline, and the predatory bird, the great predators of prehistoric times. Once man started to walk upright, he combined them into one terrifying beast, and the dragon was born. Sounds feasible, doesn't it?

From Cirein Croin, a sea serpent believed to be the largest creature ever, to the long, thick tailed wingless Beithar who haunted the quarries and mountains around Glen Coe, to the infamous Loch Ness Monster, dragons have been a part of Scottish folklore.

The Loch Ness Monster, also known as ‘Nessie’, is classified as a dragon even though many assume it is a leftover dinosaur. Some think its a lake fish that has grown to gigantic proportions. Tales of Nessie date from the sixth century and one story goes like this: When Saint Columba traveled through the country of the Picts, he had to cross the River Ness. He came across Picts burying a man said to have been bitten by the water-monster. Not a stupid man, Columba ordered one of his men to swim across and return with a boat. The chosen man, Lugneus Mocumin swam off, but the monster saw him and charged. All on shore stood in horror except Columba, who raised his holy hand and inscribed the Cross in the air. He called upon the name of God and commanded the beast, saying, “Go no further! Do not touch the man! Go back at once!” The monster drew back, retreating to the depths of the Loch. Unharmed, Lugneus brought the boat back. Everyone was astonished. The heathen savages who witnessed the miracle were overcome and came to know the magnificence of the God of the Christians. A good story, passed down through the ages. 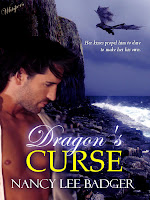 Nessie and Loch Ness are the most famous tourist attraction in Scotland and the locals will tell you about the mythical sea creature that some have actually seen in modern times and is probably a stranded dragon. The dragon can be seen as a symbol of the Celts, Picts and other early heathens of the area.

Dragons have found their way into many modern books and movies. Shape shifters are a modern day paranormal storyline and several authors have used dragon lore to create stories to entertain us all. My story is slightly different. My hero has been cursed by a dead witch for a crime he did not commit. Cursed to transform into a dragon at inopportune times, Draco Macdonald decides to live out his years on the uninhabited island of Staffa. These plans go awry when Brianna Macleod arrives with a hunting party. Staffa is a real uninhabited island off the west coast of Scotland and its huge caves would make a wonderful home for any dragon!