The Ancient Celts: A Samhain/Beltaine myth

Thank you, Miriam, for allowing me to post at The Celtic Rose.
I write Celtic historical romances with fantasy elements. My stories reflect my passion for history, storytelling and the supernatural. Inspired by the ancient Celts, my tales are filled with fierce warriors, bold women, magic, conflict and romance. My current home is in Arizona with my husband and two dogs.
The Celtic festivals of Samhain and Beltaine play an important part in my Dark Goddess trilogy. I also included a myth involving two goddesses that are linked to these important festivals. Samhain, which means ‘Summer’s End’ was celebrated by the ancient Celts on November 1st. This marked the end of the warm seasons with the reaping of the wheat fields and culling of the herds to prepare for the harsh winter. Beltaine means ‘Good fire’ and was celebrated May 1st to welcome back the sun and warmer months of plentiful food and milk. 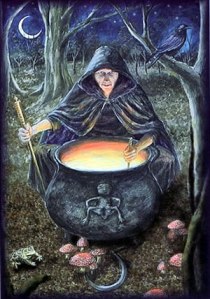 'The Cailleach' is believed to be a pre-Celtic earth goddess. She is one of the oldest and most powerful goddesses who personifies the cutting winds and harshness of the northern winter. She was worshipped by the ancient Celts as a winter goddess and a goddess of sovereignty. Her name means ‘veiled one’ and she ruled the winter months. In some stories Cailleach is the Crone. I chose her because she is a Celtic goddess known in Ireland and Scotland, which corresponded with the settings of my story. She is usually an old hag, but there are Irish myths that show her as a beautiful young maiden. In legends, she appears to the hero as a hideous old woman in her aspect of Sovereignty to test his heart for kingship. The one who kisses or mates with the old hag is rewarded—she changes into a beautiful maiden and bestows sovereignty on him. Only a true king is not fooled by appearances and can see beyond into one’s heart.
There are many stories about Cailleach, but the one I focused on is the legend of Cailleach and Brigit. Brigit is a Celtic sun goddess and a member of the Tuatha de Danaan. Her associations with metalworking (fire) and light are appropriate for rituals welcoming back the sun, healing and inspiration. To the ancient Celts, she was a triple-aspect goddess of poetry, smith-craft and medicine. In pre-Celtic beliefs, she represents the Maiden—new beginnings. In her earliest incarnation, she was called Breo-Saighit (Fiery Arrow). She is known in Ireland, Scotland and Britain with variations of her name: Brigid, Bride, Brigantia. There are many stories about her as she is an enduring goddess and is still worshipped today as St. Brigit (Brigid). Her festival is held on Imbolc (Feb. 1st). 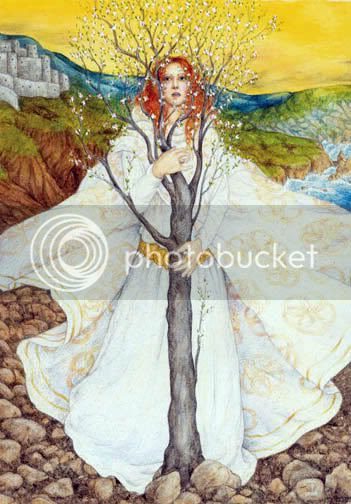 In the myth I used for my trilogy, the two goddesses are imprisoned by the changing seasons and forced to ‘sleep’ during the months their reign ends. Cailleach ruled in winter months, awakening at Samhain. Her reign ended on Beltaine when Brigit awoke to rule the summer months. Cailleach’s awakening signaled the arrival of the dark half of the year, the long cold nights of winter, while Brigit’s awakening heralded the arrival of the lighter half of the year filled with warm summer days and endless sunshine. The part that interested me about this legend is that they may have been two different faces of the same goddess. I drew on this myth and put my own spin on it.
****
Blurb from Cat’s Curse, Book One: Dark Goddess Trilogy (Celtic historical romance/fantasy):
Enter Dark Age Scotland—a mysterious, dangerous & exciting place…
Blurb: Cardea is cursed to live an eternity as a blood drinker. Aedan mac Gabrain, prince of Dal Riata, trusts no one after suffering a curse that keeps him from touching any females. Can two tortured souls find love while battling a dark goddess determined to destroy them?
Available now from Awe-Struck Publishing: http://www.king-cart.com/Awe-Struck/category=Kelley+Heckart/exact_match=exact
Kelley Heckart
'Timeless tales of romance, conflict & magic'
http://www.kelleyheckart.com
http://kelleysrealm.blogspot.com/
http://www.facebook.com/pages/Kelley-Heckart/111838455604
http://www.goodreads.com/kheckart
My book page at Awe-Struck
http://www.king-cart.com/Awe-Struck/category=Kelley+Heckart/exact_match=exact
My author page on amazon.com:
http://www.amazon.com/Kelley-Heckart/e/B002BMOQ3C/ref=ntt_dp_epwbk_0

Posted by Kelley Heckart at 4:00 AM