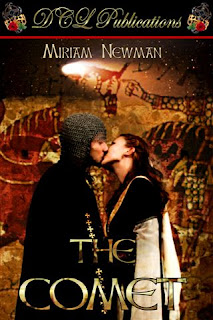 Some of you may recognize this beautiful cover by Annie Marshall for my newly-released historical romance, The Comet.  The book came out on 1/20/11 but I've been waiting for it to be available on Kindle to make it official on the blog.
This book was a labor of love.  It has been twelve years in my mind and a full year in intensive research.  The "Celtic" part of the book comes in the last half, set in Wales in 1067 as the Welsh reeled from the death of their strong king and the invasion of England by Normans.  They knew full well that they could be next unless their men and mountains protected them.  I'm sure no Welshman lay easy in his bed during those days, including apparently some of my very remote ancestors whose surnames I have borrowed for the book!  I was fortunate, too, in having been raised in an area where Welsh place names are common, so perhaps my tongue was less badly twisted than some as I created names.  What few Welsh genes may be somewhere in my DNA are buried under an avalanche of Irish and Cornish, but all of it is Celtic.  I was reminded of that many times while growing up!  I wonder what it is that makes us of that descent STILL so die-hard about it?
Anyway, here is an outline of the book, which I hope you might try if you enjoy historicals.  I do, and this was a joy to write!

An ambitious young Norman knight, Neel, is seriously wounded at the Battle of Hastings and nursed back to health by a Saxon girl, Rowena.  For her, it is only a matter of Christian charityy and she is shocked to receive his proposal of marriage in return.  It is an offer she can’t refuse, but her land is invaded, her birthright stolen.  How can she love the enemy—her husband?
For Neel, Normandy is only a bad memory.  His future lies in Rowena’s land and her bed, but he is not welcome in either.
From pastoral Sussex to the furthest reaches of Wales, he will seek to make her his own
.
EXCERPT:
Fumbling at the gaudy tie, she drew out a necklace of stones like the eyes of a cat.  Carefully drilled and strung on a fine wire, they slid through her fingers smoothly.
“They are called topaz,” Neel explained.  Stunned, Rowena had neither moved nor spoken.  “They are the color of your eyes.  I have given Bryna a gown for you, too.  And a head covering.”  He smiled at her.  “I think you will like ours better.  All I ask is that you wear them for Christ’s Mass.”
She remained obdurately silent, but she could not…dared not…refuse.  No doubt the gown was Norman.  He called her “little Saxon,” yet did not wish her to appear to be one.  And perhaps, if Ralf had spoken truly, he was correct and she wasn’t one at all.
“Here,” Neel said as if her acceptance was a given.  “Sit beside me and I will put it on you.”
Still mute, she perched rigidly on the edge of the mattress she had shared with him in perfect comfort when he was unconscious.  This time he was awake and aware and so was she-- jolted by every nuance as he touched her for the first time.
He was efficient, raising her wild hair with a hand holding its weight, parting it and dropping it forward over both shoulders so that he could fix the clasp of the necklace.  She felt the cold, rich stones against her collarbones and heard the tiny snick of the clasp as he put his claim on her.
He lifted her hair back carefully, not catching it in the necklace.  But he did not take his hands from her shoulders after he had done it.
She fell back upon manners, drilled into her by Bryna.  “I have nothing for you,” she said faintly.
“Then give me a kiss.”
There it was--the trap she had sensed.  She could wrest her body from beneath his hands and bolt for the door and he couldn’t stop her, but that was only postponing the inevitable.  Slowly, she turned her head to the side, not moving towards him but not moving away.
“Come,” he said softly, inching closer.  How was he doing that…hurt as he was?
“Be careful,” she said, ambiguously.
“It’s just a kiss.”
It would be capitulation…unspoken acknowledgement of his ownership.  But just as the needs of the body had drawn her to offered food, other needs tempted her, too.  Trapped not by his hands but by her own indecision, she made no move to resist as he turned her within their circle, now at her waist.  It was an awkward position, though, leaving her in imminent danger of falling off the side of the bed.
“Better hold on,” he said, the devil incarnate.  She did, twining her hands in his fine tunic as he spread his palm against her back to support her.  The other hand cupped the back of her head.  Infinitely gentle, he lowered his face to hers, teasing at her lips.
“Very sweet,” he murmured.  It was nothing like she had thought a kiss would be.  She had imagined Ralf plunging his tongue into her as Leofric had done…pictured him groping her breast, hurting her, gross and fetid.
It was not like that at all.  Neel’s tongue traced the outline of hers lips, slow and enticing, not a bit revolting.  When his lips nudged hers gently she opened her mouth, sighing.  He kissed her slowly and deeply, a silken invasion that set her heart pounding.  Her hold on him increased, involuntarily, and she felt his response in the strength of his hand on her back, fingers splayed, supporting her.  Guiding her.  He drew her against his chest until she could feel her breasts taut and aching against his warm flesh and started to resist.  Immediately, his grip slackened and he lifted his face from hers.
“I’m only playing, little Saxon,” he whispered.
VIDEO:  www.youtube.com/watch?v=CSKkQL4jv4c
BUY LINK:  www.thedarkcastlelords.com/TheComet.htm
KINDLE:  http://www.amazon.com/the-comet-book/dp/B004MMEG8O?tag=t0e7-20
Also available at Fictionwise and AllRomanceEBooks
Release Date:  1/20/11
CONTEST:  If you’d like to enter a drawing for a free PDF copy or Kindle download of The Comet, leave your name, mailing address and the name of the stones from which Rowena’s necklace is made!  I will draw a name at random five days from today.  Easy cheesy!
Miriam
Posted by Miriam Newman at 8:04 PM