At home in Pennsylvania, I know pretty well what the Christmas holidays will bring.  It will probably be cold, although statistically I believe our chances of a White Christmas are usually only 3-5%.  But the ground is rock-hard, the landscape sere, and when I go up the road to Wade's Christmas Tree Farm, tree saw in hand, frozen fingers and toes will expedite my cutting of just the right tree to put in my Victorian cottage.  It can't be more than five feet high because my ceilings aren't high at all.  In fact, my hand-dug basement is only about six feet deep and people have been known to burn their heads on light bulbs hanging from the ceiling down there!  My horses will be spending a lot of their time in their stalls, trying to get away from the cutting northwest wind.  Even the dogs won't want to stay outside for long.  Instead, they'll snarf their way through my kitchen, looking for Christmas chocolates they can drag down and eat so I'll have the pleasure of doing my own version of stomach-pumping:  one tablespoon of hydrogen peroxide, to be repeated in twenty minutes if there are no...results.

It is at moments like that when I begin to hear "Christmas in Killarney" running through my head and to get a longing for a mere Force 10 gale.  Just the kind of day that makes you long for a cup of Bewley's tea in the hotel lobby at the Killarney Towers.  When the rain lets up, with water pooling in the streets but people already starting to emerge from stores and pubs where they've taken shelter, I envision a slow trickle and then a brisk rush of shoppers darting into Dunne's and other department stores decked out for the holiday.  I would suppose the stores aren't on Irish time now, but remain open later during the Irish twelve days of Christmas.

I would also think Killarney on Ice has been booked and will be appearing nightly, since ice skating and winter walks are always popular but never more so than at Christmas.  It's still not too cold for open air markets offering every possible inducement from woolen sweaters to precious green Connemara marble to lovely Inis perfume from Fragrances of Ireland and maybe even the heather and moss soap of which I'm so fond.  And food, ah, yes.  Not just the hearty Irish fare which I seem absolutely, perhaps genetically predisposed to like--chowing down happily on the classic Irish breakfast:  Irish bacon which puts our to shame, fat sausages, eggs, fried tomatoes, black and white pudding and potatoes, toast and tea.  But there are also lovely little fish and chips shops featuring the sweet white plaice I never had till I went to Ireland.  And shops with some of the hottest chicken curry this side of India.  And pub grub--washed down with Guinness Stout.  Lots of it, since I only seem to get mellow when I drink in Ireland.

As much as I ate there, though, I never gained any weight and it was actually difficult to find extra large sweaters to take back to some of my friends in the States.  Since I'm no Skinny Minny myself, it was pure, unadulterated bliss to be able to put down three real meals a day without counting every calorie.  People walk in Ireland...a lot.  I wouldn't mind walking past Santa's Lodge where children are perched on Santa's knee, asking for gifts, just as they are in the States and so many other places.  I could take in the concerts and shows at night.  During the day, once the skies clear, I suspect I'd rather put on one of my Aran sweaters against the damp chill and hike on down to Killarney National Park or to Muckross House and Abbey to see the buildings artfully decorated for the holiday. 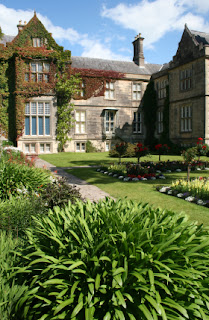 And then back for tea--or maybe something stronger at The Laurels Pub.

Someday...someday, I swear...this is going to happen.
Posted by Miriam Newman at 2:09 AM