CHRISTMAS IN KILLARNEY - PART ONE

First, let me state clearly that I have never spent Christmas in Killarney.  Wished to?  Yes.  Planned to?  Ditto.  Done it?  No.  The call of the holidays always pulled me home to the States even during the three years when I spent as much time as possible in Ireland.  There's just something about family.  But I longed to see Killarney as Christmas approached, with Dunne's Department Store decked out in lights, horses hitched to jaunting carts, covered with blankets of red and green, and well-insulated swans still sailing peacefully on the increasingly frigid waters of Muckross Lake. 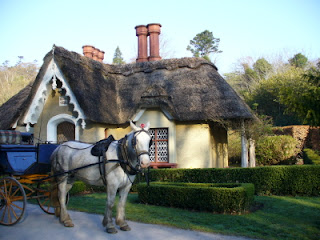 At least, that's how I pictured it.  Never saw it, though.  The closest I came was spending Halloween there.  That was a still-warmish time of muted fall colors when tinker children begged money from me and earned a good scolding for "bothering the Americans."  Funny, at the airport in Newark several travelers to Ireland  thought I was Irish (it's the face, you know), but as soon as I got to Ireland I was pegged as indisputably American.  Maybe it's because Irish women of a certain age don't wear jeans, but American women apparently don them until shortly before they shuffle off their mortal coil.  I rather expect to be buried in mine unless I can talk someone into tossing my ashes from the Cliffs of Moher, thus retracing my grandmother's journey to America.

Next week:  a history of Killarney.
Posted by Miriam Newman at 8:01 PM