Hidden by the Rose 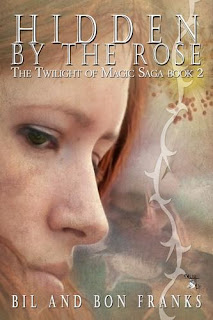 You  might call me a rose person. As a former professional gardener, and as a resident of a gardener’s hell called Texas, you would think that these would be mutually exclusive. Not so.
There is a type of rose that is sturdy enough to have survived largely unhybridized since the days of the ancient Chinese dynasties. This type of rose is the so-called antique or “China” rose. Here is a rose variety so strong of spirit that it can withstand years of total neglect, droughts, impoverished soil—ah, yes, the very words that reflect my gardening experience in Texas.
So what does this have to do with a book, you may ask? My husband and I are the proud parents of a YA fantasy novel called Hidden by the Rose.  The setting is Britannia in ca. 430 AD. The title is taken from the book, from a passage when the young heroine Caylith hears that she is a “thorn in the side” of some very unpleasant people. She gravely remarks that “a thorn is a weapon, hidden by the rose.” 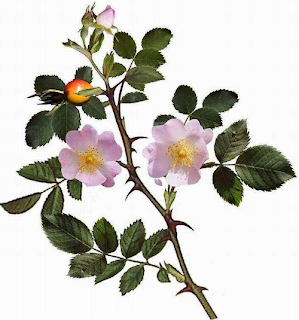 The symbol of the rose is a central one in this book. The  ancient rose called Rosa canina, the dog-rose, was planted even thousands of years ago around properties in Britannia to keep intruders at bay. Under its light pink, five-petalled clusters of blooms lay half-inch thorns, curved and strong, enough like vicious teeth to have given it the name.
Caylith, too, is a rose person. She is drawn to all plants, and the dog rose is one of her favorites. Its plump hips (seed cases) yield a tea that has a profound effect on her. And its dog-teeth properties are strong enough to help her bring down some evil people.
In a way, of course, the title of this book refers to Caylith herself. Although she is “not tall” (her own words to describe her 5-foot frame), she becomes quite a warrior—in spirit, anyway. Her feisty personality and her determination to win the day are the very thorns that are hidden beneath her attractive appearance.
All this is a round-about way of inviting you to try our novel series “The Twilight of Magic.”  It is geared at readers from ‘tweens to teens and finally to adults in the final sweet romance. The first in the series, Running Over Rainbows, has won five-star reviews, and of course we'd love you to start with that first book.
This very short excerpt will give you a bit of the flavor of the novel. Caylith finds herself in a magical garden with one whom she had feared, who has revealed himself to be not only a king, but her grandfather.
I  thought about the world I had just escaped.
“Yes, I miss dear Mama. She taught me to be strong of mind and to follow in the old traditions. I am not the best of students, but I have tried. She never had time to teach me about my ancestors before she…left.” The image of a great hungry fire filled my mind. “I will not believe she is really gone. She would have fought like a mother bear to protect what was hers. I am sure she was taken captive by the savage Eire-Landers.”
The king’s eyes seemed to flash dangerously beneath the great wing-like brows. I understood his passion. “Yes, I am sure your blood ran strong in Mama.”
The soothing atmosphere of the garden loosened my tongue. I was starting to release all my pent-up fears and dreams to a complete stranger, but I did not regret it. “I was wrong to think you are like the evil duke. He wants my property only. He does not want me.”
Grandfather uttered what sounded like a sigh within a sob. I looked at him, but his beard was bent so close to his chest that I could not see his face.
I stood then, and the king slowly rose also. We stood close together for a long minute. “Your High—Grandfather…” I said in almost a whisper. His great bearded head bent lower. “Will you ever forgive me for running from you?”
The king’s face began to glow as though a kiln fire ignited from within. Instead of answering, he held out his hand to me, palm up. I placed my diminutive hand inside his, and we walked slowly out of the garden. 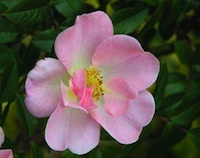 Email ThisBlogThis!Share to TwitterShare to FacebookShare to Pinterest
Labels: Bil and Bon Franks, Britannia in 5th century, dog rose, Hidden by the Rose, magic and reality, Rosa canina, rose as symbol, Running Over Rainbows, St. Patrick in YA literature, YA historical fantasy