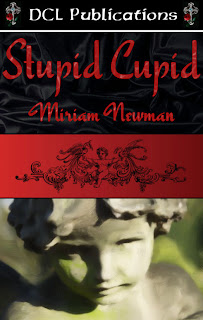 Just in time for Valentine's Day, here is a sweet little romance novella in ebook form.  Actually a spin-off from my novel "Confessions of the Cleaning Lady," this is a stand-alone set in Ireland.

When the son of Zeus and Aphrodite bumbles into a meadow south of Killarney, he is met by a band of indignant faeries outraged by his target practice.  Soon, however, all the supernatural creatures are overshadowed by an estranged couple intent on fisticuffs!  Can Cupid effect a reconciliation between the humans?  Or is just a wee bit of intervention by the Fae in order?
Excerpt:
“You, Fat Boy.”
Such an insulting tone from a faerie could only come from one with Vixen blood.  Burlap took on the enemy.
“That’s Cupidon to you,” Cupid lisped in his irritating falsetto.  “What do you want, Vix?”
“Yourself out of here.  This is our meadow.”
“But my day is about to be observed.  I have leave to pursue humans where I may.”
“Not from us.”
“This is a crucial time and those two seem to be in need.”
“Well, we’re sick of your bloody arrows and we want you out.”
“Take it up with my father,” Cupid yawned.  “Right now I need a nap.  That woman moves faster than fire from the sky.”
It was a none-too-subtle reminder that Zeus had fathered him and had dominion over the skies.  Having been dislodged from one tree home by bolts from the heavens, the band had no wish to repeat the experience.  Even Burlap was silent as Cupid took wing, fluttering in his usual lackadaisical manner into the fringe of woods.  No doubt he would find the most comfortable roost well padded with moss or even a human tree house—he loved those—and pass the evening in comfort while the faeries picked his arrows out of their meadow.
“It was only the one.”  Violet, ever the peacemaker, located Cupid’s projectile.  “That’s not too bad.”
“Not yet,” Burlap groused.  “But wait till all the young lovers start coming down here.  They do, you know, every spring.  Just like the salmon, spawning upstream.  He’ll have his pick then.”
“But for now it’s too cold,” Blossom said authoritatively.  “There won’t be much trouble yet.”
“Ye dinna call those two trouble?” Heather-Bloom snorted.  “Rolling on the ground like hedgehogs in a fight?”
“Near as prickly,” Burlap agreed.  “I give her the edge, though she’s smaller.”
“Weel, ye know what humans say,” Heather concurred.  “Tisn’t the size of the dog in the fight, but the fight in the dog.”
“She’s got plenty,” Burlap said approvingly.  She did admire moxie in whatever species.
“It’s none of our concern,” Blossom ruled, but she feared the band would ignore her.  Living in forced proximity to humans for several seasons after they had been trapped in luggage and transported to a distant land, they had acquired a taste for gossip.  Even now that they had been returned to their own fair Isle, the boundaries between human and Fae were growing ever more flimsy, in Blossom’s opinion.  She feared for the future.  This was but one more example.  She sincerely hoped they had seen the last of the silver-haired man and his feisty mate.
BUY LINK:   www.thedarkcastlelords.com/stupid-cupid.htm